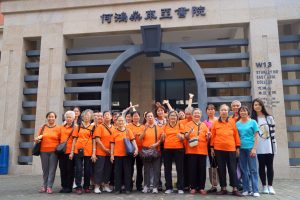 “Old buddies” were very excited to pose for photos at the entrance of the College.
老友記們興奮地在書院門外擺姿勢拍照留念。

On 26th October, 2014, an ordinary Sunday, Stanley Ho East Asia College (SHEAC) warmly received a large group of extraordinary guests. The event entitled “Visit to UM & College Fun Day for Vulnerable Groups of Macau Community”, as the second part of “Oxfam X Caritas X SHEAC Community Walk Series”, was co-organized by SHEAC, Oxfam Hong Kong and Caritas Macau. About 60 visitors from three vulnerable groups of the local community, namely, elderly, family and foreign workers, enjoyed a half-day visit and fun activities in the College and on the new campus of UM. Among these visitors also included some of the residents visited by SHEAC students during the Community Walk on 8th October.

For more in-depth experience and closer interaction, the visitors were divided into small groups, each of which was led by several volunteers comprised not only SHEAC students, but also social workers and volunteers of Caritas, as well as tutors and student leaders from Chi Sun College of The University of Hong Kong invited by SHEAC. 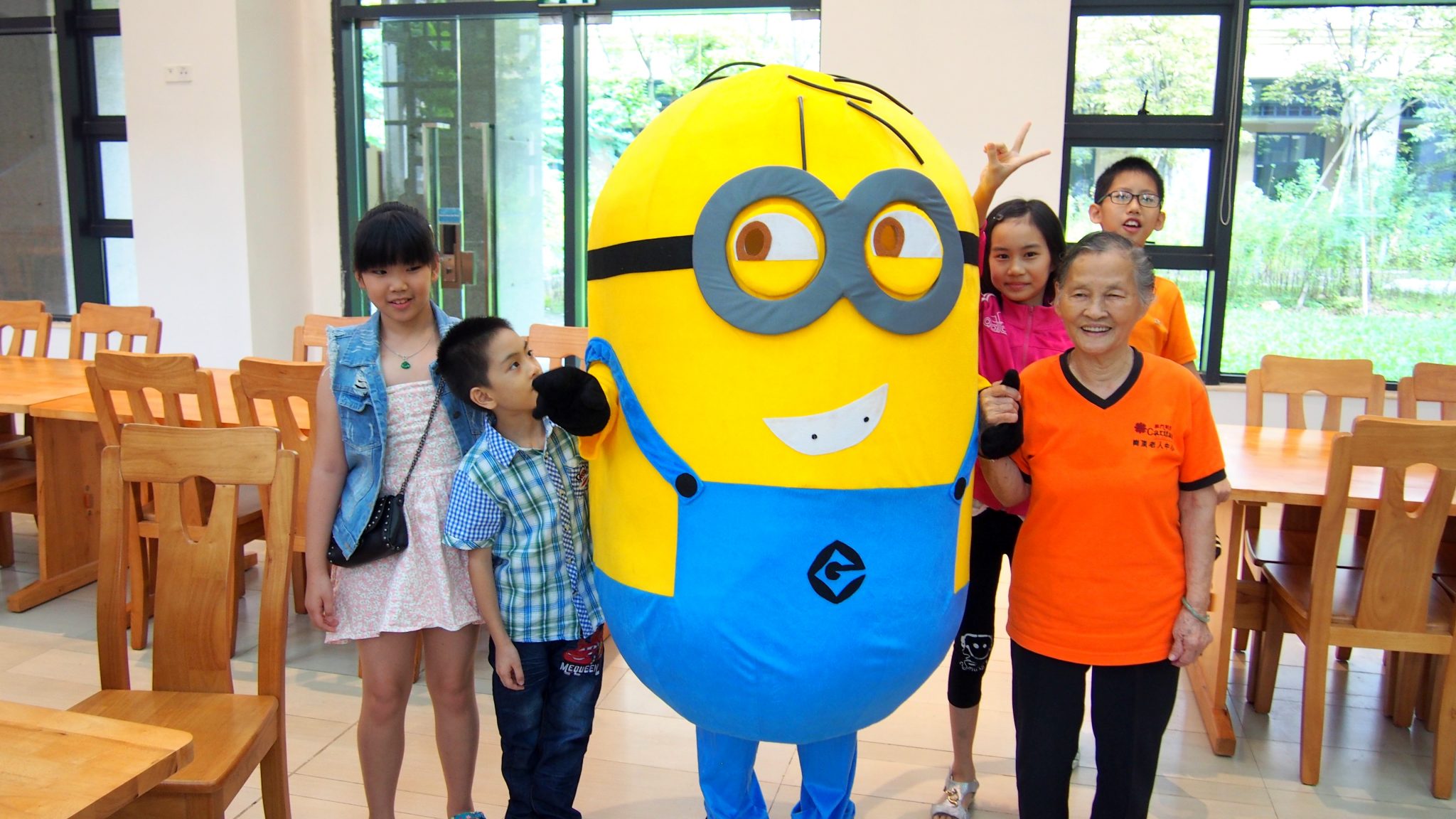 Appearance of the Milion puppet brought a lot of excitement to the children and even the “old buddies”.
小黃人大人偶的出現為孩子們甚至老友記帶來了許多歡樂。

At around 11:30am, the first batch of visitors, the family group, arrived. Most of them were children who were adorable and lively. Led by the SHEAC students, all the three groups of visitors toured around the College. The College students eagerly introduced the facilities, their daily lives and activities in the College. They also answered questions about the fees of the University and residential colleges. Through such casual conversations, volunteers and visitors were getting familiar with each other, and loads of laughter could be heard all the way. 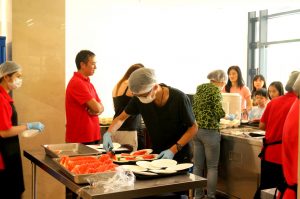 SHEAC student volunteers assisted the work at the serving counter of the Refectory.
書院義工同學協助服務櫃檯分發食物的工作。

Lunch was also arranged for the visitors at the College Refectory. Three SHEAC students volunteered to help at the serving counter, and experienced the hard work of kitchen workers. By wearing a mask and a hair cover, they felt a strong sacred responsibility, and their hearts were filled with a sense of satisfaction when serving food for the visitors. Over the meal, the visitors and volunteers had lively chats, and learned each other’s backgrounds and personal experiences. After the lunch, the visitors were given a set of snacks and a fridge magnet of the College as souvenirs. A man-size Minion puppet also came to play with the children and even the elderly! 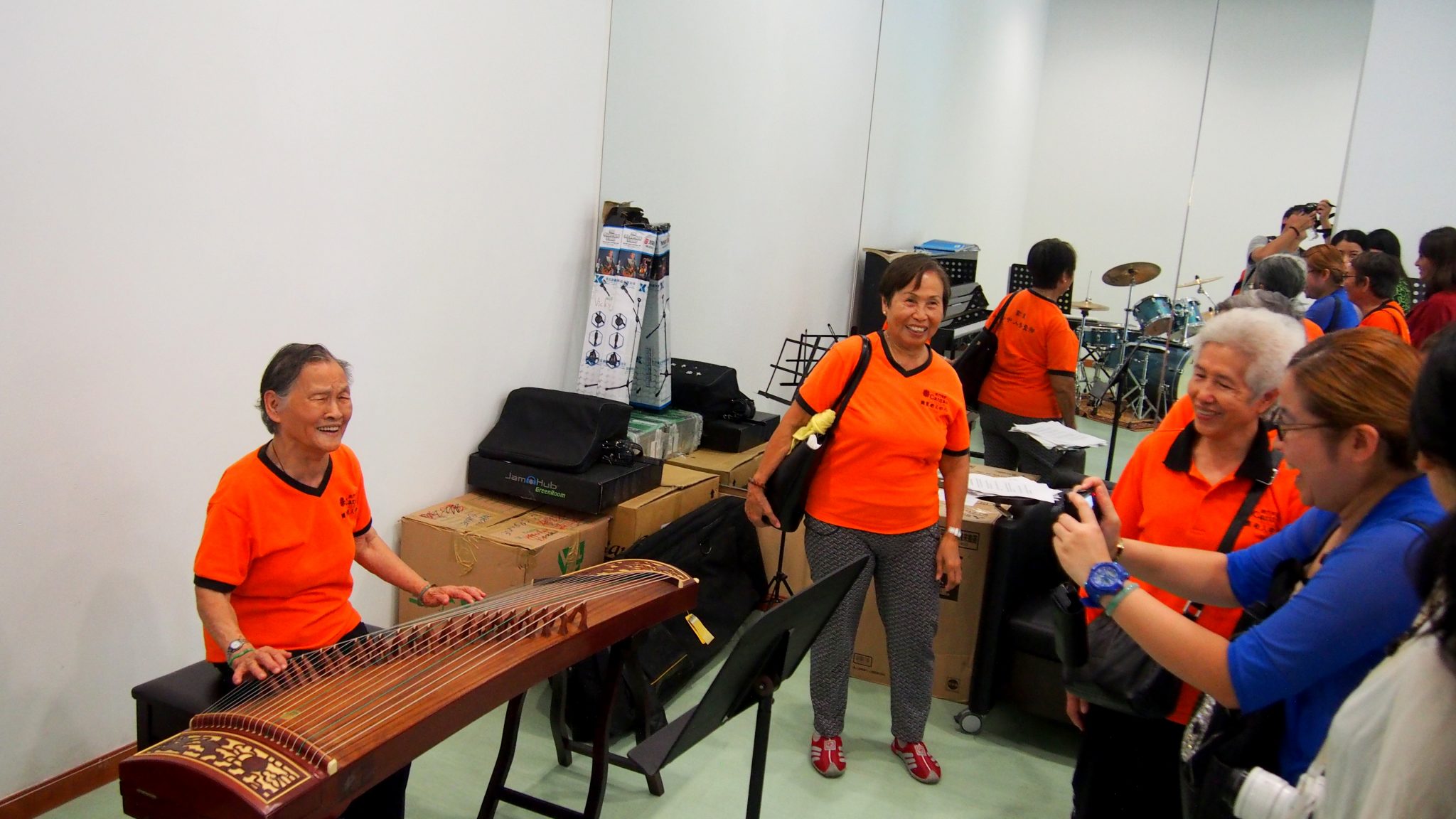 The old ladies were happily trying the various musical instruments in the music room at the College.
老友記們在書院的音樂室興高采烈地嘗試各種樂器。

At three o’clock, the UM Public Relations Student Ambassadors guided the groups to visit the new campus, and each of the visitors also received an UM postcard set. The whole event ended with a series of group photos taken in front of Wu Yee Sun Library showing everyone having a big smile.

After the event, the SHEAC student volunteers said that they gained a lot: Although they felt tired after the series of activities, they expressed that it was worth it when they saw the smiles on the faces of the children, elderly and foreign workers. The students believe that the vulnerable groups in the local community need more care and empathy. For example, the children may have their own ideals and orientations. Even our simple words or moves could give them a great encouragement. We hope that everything that happened on that day has become unforgettable memories to all the visitors and volunteers. 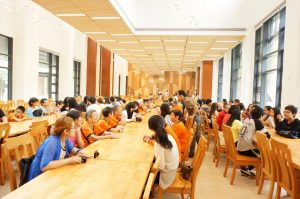 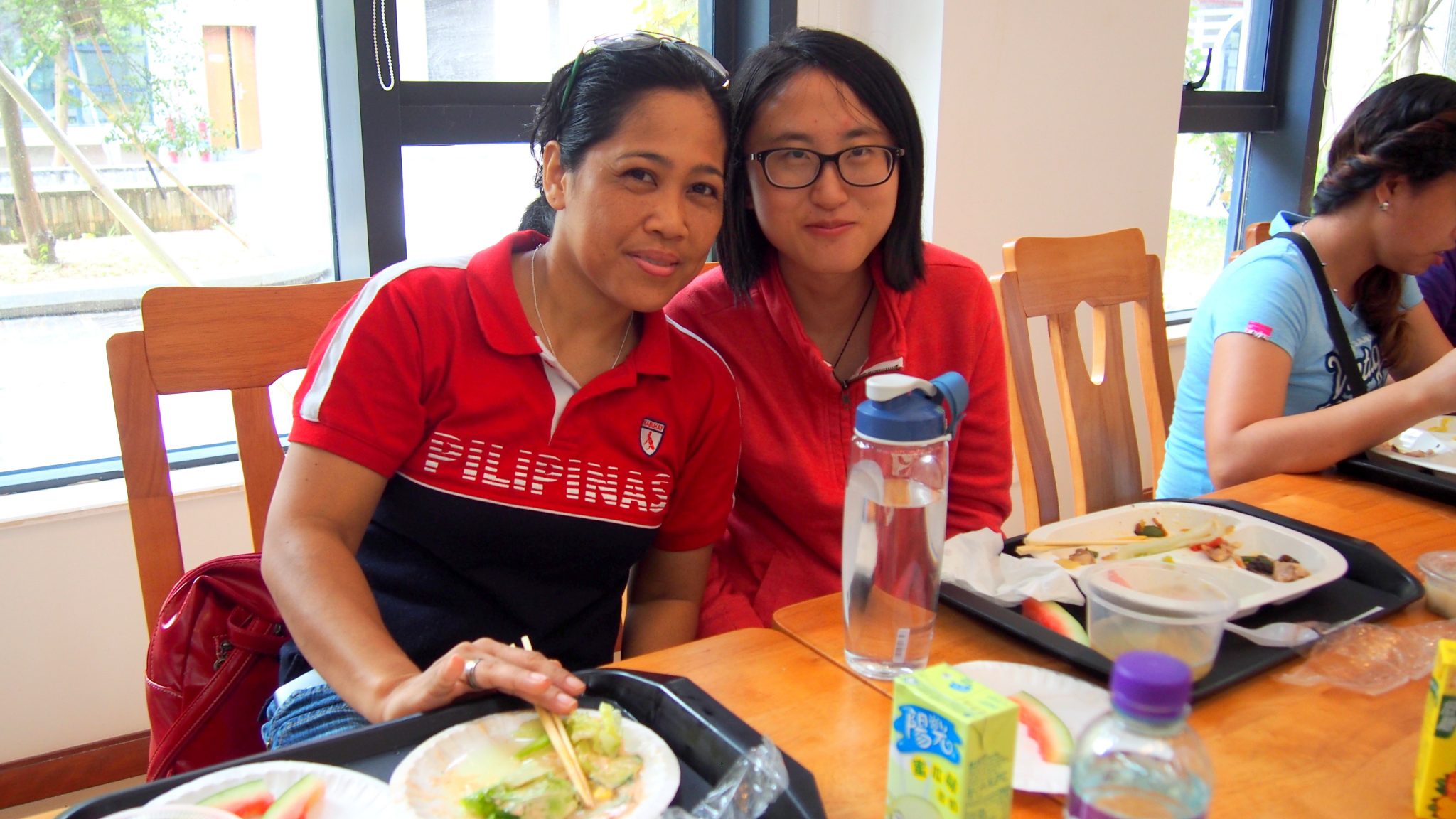 Foreign workers were very excited about taking photos with student volunteers and among themselves.
外地勞工十分興奮地與學生義工及彼此拍照。 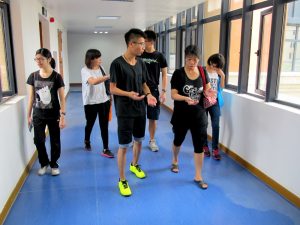 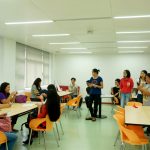 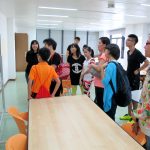 SHEAC students were patiently introducing different aspects of College life to the parents. 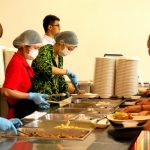 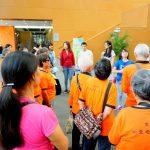 The old ladies were happily trying the various musical instruments in the music room at the College. 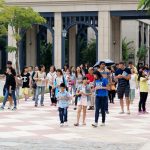