“I am who I am”, Sparkling like Fireworks with Different Colours

“I am who I am”, Sparkling like Fireworks with Different Colours 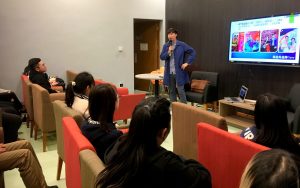 On 23rd January 2018, Stanley Ho East Asia College invited Mr. Gary Ng Ka-Wai, an alumnus of the University of Macau, to share his experiences in hosting and drama. Gary regularly serves as emcees in television programmes in Macau, and his areas of focus also include acting in stage plays and dubbing for video shows.

As an alumnus, Gary gave students a very cordial and warm greeting, and enthusiastically shared a lot about his career experiences. Gary told that since childhood he has had a very strong desire in expressing himself, and liked imitating no matter what it was about. He also described himself: “I am who I am, like fireworks that blossom in unique colours.” 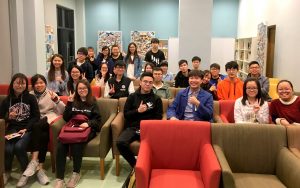 Gary and participants took a group photo after the sharing session.
Gary在分享會後與同學們愉快地大合影。

Gary joined the drama club in his high school, and won the prize in an inter-school drama competition, which laid a good foundation for his future performing career. Gary pointed out that actors could experience numerous lives, and, through the scripts and their roles, express some political viewpoints or do something that they normally would not do. Through acting, he could understand the world beyond himself and extend the scope of his world. Gary also bore in mind his teacher’s advice that to learn how to act is to learn how to be a good person. He encouraged the students to work hard to discover and cultivate their interests, rather than easily give them up.

It is hoped that students have learned a lot from Gary’s sharing, and would keep on learning and innovating to nurture their own interests. 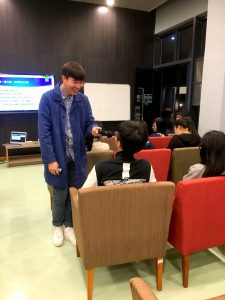 Gary chatting with students about their backgrounds and experiences.
Gary跟同學們聊起他們的背景和經驗。