A Day in the Life of a Refugee

A Day in the Life of a Refugee 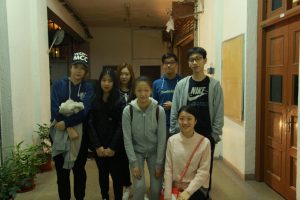 Students shared their experiences after the event.
活動結束後，學生分享他們的體驗。

The word “refugee” seems far from our students who live in this peaceful part of the world, and we hear “refugee” mostly from the television or newspapers. Students may not even have any idea about how the life of refugees is like. In view of the continued crisis in Syria, on 11th March afternoon, Stanley Ho East Asia College (SHEAC) organised 18 students to take part in a simulation workshop where they spent four hours in refugees’ shoes, so as to reflect on people who live on the same earth but are suffering from wars.

As Macau’s first large-scale simulation event with a theme of refugees, “Without a Home in the World: A Day as Refugees” was jointly organised by Oxfam and Bosco Youth Service Network in St. Joseph Seminary and Church. Participants played the role of Syrian refugees, they tried to avoid being killed by militants, and even fled to neighboring Jordan, or were sent to stay in refugee camps. They had to overcome different hardships on the way. SHEAC students actively took part in the process of becoming a refugee. Before the workshop started, participants had to hand over all their belongings, a simulated identity card was given to each of them while headscarves to female as well. The initial setting was before the civil war broke out in Syria, so everyone was happy to go to the bazaar to enjoy some traditional handcraft learning activities. 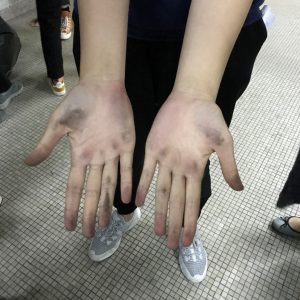 Hands of a student after labour work
同學做完勞力後的雙手

Suddenly, all the lights went off. A group of masked militants attacked the bazaar, they were rude to the “people” and forced them to take off their shoes and go out and make a tent with bamboo poles. After the event, one of the students expressed, four of them were forced to squeeze in the tent, which was uncomfortable for those who were a bit bigger. Then the armed men taught the students to make slippers with water bottles. The size of the water bottles was uneven. Some of the male participants with large feet felt uncomfortable walking with these slippers. Participants were also forced to do some labour, such as cutting apples and picking beans. After a series of experiential activities, participants gathered to share their thoughts and reflection, and learned more about the lives of and difficulties facing refugees in Syria and other parts of the world.

Students said that, through the refugee simulation workshop, they became emphatic for refugees’ powerlessness and bitterness, losing liberty and being manipulated like a robot by militants every day. They also believed that this event has motivated them to cherish what they have now and live in the moment; and hope for world peace, refugees are no longer refugees, everyone can enjoy a better future! 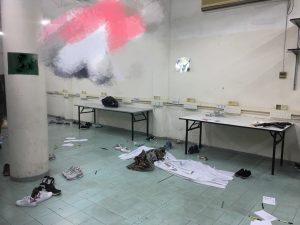 A mess in the bazaar left behind after being hit by the militants. 受到武裝分子襲擊後，市場混亂不堪。 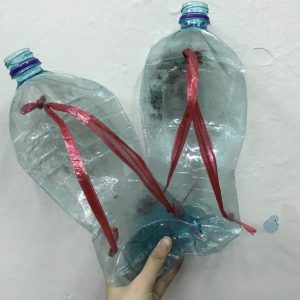 A pair of slippers made from discarded water bottles
一雙用廢棄水瓶製造的鞋子